Sander Jorve just wants to keep his wife and son safe. Living in the brutalized lower class of Lantern City means living in near constant darkness, the enormous walls of the city always looming overhead, while the upper class enjoys the elevated, interconnected towers and airships above. When Sander’s brother-in-law, the persuasive activist Kendal, convinces him to infiltrate the brutal ranks of the Guard, he’s set on a dangerous path that will test his abilities and beliefs, all in the name of making a difference for his family and his caste.

As Marceline and Princess Bubblegum try to get back to Ooo, Finn has to figure out how to deal with Suspencer when he can’t get close to him! Meanwhile, Cinnamon Bun is taking advantage of his new abilities to the extreme.

As Bill & Ted bring popularity and happiness to the childhood of their future oh-so-evil arch-nemesis, De Nomolos, they may have accidentally changed more than just his taste in music. With the looming threat of an altered timeline ahead of them, it will take more than the intervention of Rufus or the Grim Reaper to bring excellence back to the universe! Featuring a prehistoric time-romping back-up story by Adam P. Knave & DJ Kirkbride (Amelia Cole) and Wook Jin Clark (Adventure Time: The Flip Side).

Bugcat’s evil plan comes to fruition as he transforms into a monstrous beast to stop the Bravest Warriors and ruin summer camp forever! The Bravest Warriors are going to have to team up with the campers to defeat Bugcat, but do these kids have what it takes?

Harrow and Branch come face-to-face with the most notorious—and completely unknown—killer in U.S. history when Control informs them that they not only know who killed John F. Kennedy, but that the assassin is still alive.

As clashing forces fight for control over the Trans-Siberian railway, Snake learns things have not changed much since his first time as a soldier. With the ever-watching eye of a masked stranger upon him, Snake will discover that the past is never too far behind him.

Following a night of “mild abandon,” Esther finds herself singled out by the vile collegiate man-site “Bantserve.” When the university authorities are less than helpful, she vows to take down this cyber institution!

The final battle for Detroit rages on the steps of OCP headquarters. Death on all sides grows in numbers every second. With Killian making his way to the Old Man, Lewis and RoboCop must come together one last time to see this war to its end. 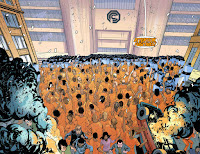