Magnetic Press is about to Get BITTEN 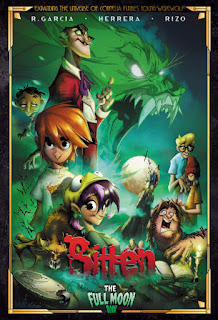 Magnetic Press has announced the production of international best-selling author Cornelia Funke’s “Little Werewolf” as a graphic novel to be created by writer/director Raul Garcia (Aladdin, The Lion King, Jimmy Neutron) and illustrated by fan favorite Francisco Herrera (Spiderman’s Venom, The Prodigies, Megamind). To celebrate the kick-off of the project, Magnetic Press is publishing an art book spotlighting the pre-production and design work going into the adaptation entitled BITTEN: THE FULL MOON BOOK.

THE FULL MOON BOOK is a 48 page peek into the forthcoming graphic novels design process, with hundreds of sketches and illustrations introducing readers to Matt’s world, a typical teen who has the misfortune of getting bitten by a werewolf on his way home from the movies one night. Dealing with such a change in high school is bad enough, but when the original werewolf is Hollywood legend who comes looking to finish the job, the adventure and hijinks skyrocket!

The graphic novel will be preceded by a free mini-comic written by Garcia and illustrated by Herrera, to be distributed as part of Diamond Comics’ “Halloween Comic-Fest” this October. Fans and retailers can order their mini-comics from Diamond in July. 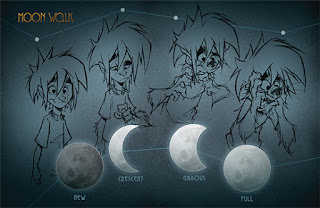 Best known for her best-selling Inkheart Trilogy, The Thief Lord, and Dragon Rider books, Cornelia Funke’s stories have gathered a worldwide fan base, with Little Werewolf capturing hearts of all ages around the globe. She has won the Book Sense Children’s Literature Award twice and was voted into Time magazine’s 100 most influential people in 2005. Following the feature release of Inkheart, she is excited to see Little Werewolf develop as an animation-flavored graphic novel.

The graphic novel will be written by writer/director Garcia, whose work on classic films like Land Before Time, Who Framed Roger Rabbit, and Rugrats has solidified him as a fixture in the animation industry. Character designer and illustrator Herrera, best known for his work at Marvel, as well as character design for the feature film Megamind, will bring the project to life.
“The passion and artistic skills Raul and Francisco brought to this is a gift to a storyteller that equals chests filled with treasure.” Says Funke. “No. In fact it is a much better gift!”

“Adapting ‘Young Werewolf’ into a graphic novel has been a real challenge and a tour de force for Francisco and myself,” says Garcia. “Not only did we want to respect the spirit of the book, but we wanted to expand on the Universe of Cornelia’s characters and translate the story to the world of Hollywood and a real city like Los Angeles.” 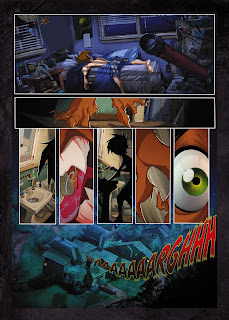 - Cornelia Funke has won the Book Sense Children’s Literature Award twice and was voted into Time magazine’s 100 most influential people in 2005.

- Limited Edition – Only 1,313 will be available to stores through wholesale distribution! No reprint will be offered before the first volume of the Graphic Novel is released in 2016!

- Features vellum tip-in pages that overlay ghostly images over the pages beneath, and spot-UV elements on the cover.

- It will be available in extra-limited, advance, signed quantities at next month’s San Diego Comic-Con, where fans can meet the creators in person. The remainder of the print run will be available at comic-shops and book stores in September.

For more information, including where to pre-order, visit www.magnetic-press.com/bitten.