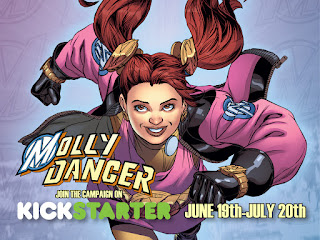 “The plan is really three fold, actually.” Explained Igle “ The bi monthly series will begin shipping in July 2016 and will keep the same format as the first oversized hardcover. The Hardcovers will continue with Book Two as a 9x12 graphic album and each six-issue story arc will be collected as a comic sized trade paperback. Molly Danger: the series will also be available digitally on Comixology.com utilizing their guided view technology.

Created by Igle, Molly Danger is the story of Molly, a 10-year-old superhero who has been 10 years old for over two decades. While loved by the public and a virtual star, she’s lived a sheltered and protected life until a new member of her support team, Austin Briggs and his stepson Brian enter her life. The picks up after the first book ended, as the mysterious creator of Molly’s enemies, the Supermechs, returns to wreck havoc in Molly’s hometown of Coopersville N.Y. Igle will once again write and pencil the new book, with inks by Juan Castro (Sensation Comics, G.I.Joe).

Incentives include signed copies of both the hardcover versions of Molly Danger: Books One and Two, a print set featuring artwork from Mike Norton (Battlepug), Mike McKone (Justice League united) Agnes Garbowska (My Little Pony) Steve Ellis (Convergence: Green Lantern) Jim Califiore (Leaving Megalopolis) and more, a six issue Comixology subscription for the series which will feature bonus material and even an opportunity to become a reoccurring character in Molly Danger the series and have your likeness drawn by Igle. Stretch goals are planned as well.

The campaign in now live and running at https://www.kickstarter.com/projects/mollydanger/molly-danger-the-ongoing-series and runs until Monday, July 20th.