With a meteor days away from causing an extinction-level event on Earth, time is running out for Elena Marlowe. While most of the planet’s population and her family were approved by the government to escape on one of the giant spaceships headed to another planet, her application was denied due to her mysterious past. With the meteor fast approaching, Elena tries desperately to find a way to fake her way onto the last ship or else be left behind to die with the rest of Earth’s rejected denizens. 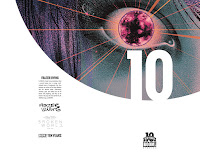 In Arcadia, a child psychologist assesses Giacomo and discovers there’s something very different about him. Lee is pulled out of a plastic surgery procedure by officials and flown to Beijing to examine a Homesteader’s corpse. Officials believe that the real world is conspiring to introduce death into Arcadia. In the real world, Valentin confronts Lee about his illegal midnight calls to his suicidal daughter Coral in Arcadia.

Jack Burton, a macho, truck-driving adventurer, shook the pillars of Heaven when he defeated the evil sorcerer Lo Pan. He even helped his best friend Wang save his fiancée from the sorcerer’s clutches. Now Wang’s wedding has been invaded by evil forces with one thing on their minds—revenge against Jack Burton! Collects issues #1-4 of the critically acclaimed series USA Today calls one of “2014’s best of the best.”

Final issue! When he tracks the Scarf Man to his secret lair, and with Bianca, R, and Z’s lives at stake, Poe comes face-to-face with the man who’s been kidnapping the Mice from the Maze.

Final issue! When Det is kidnapped by Robotics, Rell will have to face the consequences of her attachment to the little girl.

The evil demon has got her filthy claws into the world, and it’s up to Great Warrior to stop her. But what happens when her greatest secret is revealed?

Final issue! Bahdoon is quickly running out of time. Will he choose his own survival over stopping the monster?

Final issue! Leo must decide between his old life and his new life as the fate of the universe hangs in the balance. Does he save his real family, or the ones they forced him to love? Does it make a difference?

New story arc! Bay Point Prep, one year later. The students have survived a year in the Woods, settling into their new roles at Bay Point. Isaac and Ben are together and would be perfectly happy if not for the dreams Isaac has of Adrian and his anger toward Karen for her role in his disappearance. Karen is training to be a Hunter, while Sanami and Maria handle the day-to-day running of the school. Calder is missing. The Black City is still out there, and the students will need to mend the rift that’s grown between them to find it.