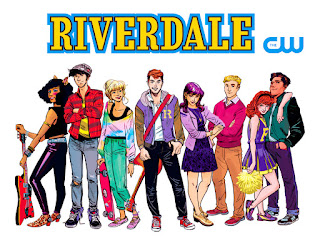 Originally developed for FOX, “Riverdale”—a dark, twisty, one-hour drama based on the iconic “Archie” comic book characters, including Archie, Betty, and Veronica, as well as Josie and the Pussycats—is now set-up at The CW network, with the key players remaining the same: Warner Brothers is the studio, THE FLASH and ARROW chief Greg Berlanti is producing and Roberto Aguirre-Sacasa, Archie's Chief Creative Officer, is writing the pilot.

"The CW is a perfect for for the vibe and tone of the Riverdale series," said Archie Comics CEO/Publisher, Jon Goldwater. "We couldn't be in better hands. Working with WB, Greg Berlanti and having Roberto involved has made this a dream project come to life. This is a major, major thing for this company."

As fans know, Aguirre-Sacasa is also the mastermind behind Archie's two bestselling and acclaimed horror titles, AFTERLIFE WITH ARCHIE and CHILLING ADVENTURES OF SABRINA. He is also a consulting producer on the “Supergirl” series.


The "Riverdale" news comes hot on the heels of the hugely successful sellout Archie relaunch, kicked off by a stellar debut issue from the powerhouse creative team of writer Mark Waid and artist Fiona Staples, which has been the buzz of this year's Comic-Con.