The Fellowship has obtained sneak peeks for comics from Archie that will come out this week...

COMIC SUPERSTARS MARK WAID AND FIONA STAPLES REIMAGINE AN ICON! Change is coming to Riverdale in this can’t-miss kick-off to Archie’s new ongoing series! Familiar faces return in new and unexpected ways in this must-have #1 issue! As the new school year approaches, you’d think Archie Andrews would be looking forward to classes and fun—but nothing is as it seems in the little town of Riverdale. But is this a one-off or a sign of bigger changes awaiting for America’s favorite teens—and the entire town? Find out in this exciting and remarkable first issue!

Josie and the Pussycats are back and take center stage in this brand new story! When the Pussycats are set to audition for “The Midvale Morning Show” summer concert series, infamous-meddler Alexandra Cabot does everything she can to ruin their chances and snag the spotlight all to herself! Will she succeed, or will she just make a monster out of herself? Find out in “Showstopper,” the hilarious lead story to this comics double digest!

The FOX has been punched, thrown, stabbed, crushed, shot at and smothered by a virtual army of super villains—but nothing is stopping Paul Patton, Jr. from finding his son! But that was just for starters—get ready for intense action and psychedelic paranoia as The Fox straddles the line between reality and a world of NIGHTMARE! Who is behind all of this madness? Will Fox’s son, the Ghost Fox, make it out of the city alive? Find out as the hunt continues! Featuring cover art from Dean Haspiel, Irvin Rodriguez, Dirk Shearer and Jay Shaw! 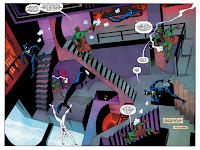 The heroes of the SONIC/MEGA MAN crossover event: AT WAR?! “Worlds Unite” Part Seven: The unified army is not so unified anymore!  What has driven Mega Man, X and their robot companions to attack Sonic and the Freedom Fighters?  Drs. Eggman and Wily may have the answer!  Or a weapon.  Could a weapon be the answer?  Or is it more trademark treachery?  Meanwhile, Sigma grows in power, preparing for the next phase of his master plan! And speaking of masters, this issue features cover art from master-artist Patrick “SPAZ” Spaziante, a Heroes Collide Throwback Variant cover from Rafa Knight and part 7 of the epic 12-part connecting variant cover series by artist Ben Bates!

It’s always important to have something worth fighting for, whether it’s an issue as big as equal rights or one as small as a raise in your allowance! The Riverdale kids are no strangers to making their voices heard when they want change. This digital exclusive collects two tales of Archie and friends taking on the establishment—and each other!

The Riverdale Shore is about to see the wildest party ever! Betty, Veronica and the gang are taking over the beach in this DOUBLE-SIZED digital exclusive collection. With all the sun, surf and swimsuits, it sounds like a paradise! Put on some sunscreen and join us!