During a pre-Christmas ball, Daisy kisses a boy she shouldn’t have, while Susan may have done more than that with McGraw. Esther dreads going home for holiday break for fear of running into her ex.

Cake is a Card Wars champ who can’t be beat, and Fionna…is really tired of getting beaten! They set off in search of a challenger who can really test Cake’s mettle. When they stumble across some gamer slugs, they think they’ve hit the jackpot, but these guys have never heard of Cake and refuse to even play with her! 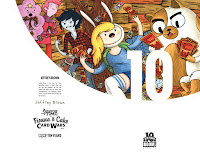 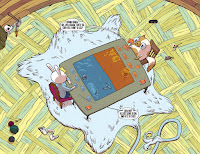 The new creative team of writer Fred Van Lente (Archer & Armstrong), artist Joe Eisma (Morning Glories), and Mondo cover artist Jay Shaw (Evil Empire) brings Jack Burton into 2015! Jack is a man out of time. His friends and the world around him have changed. He’s now on a hunt for the Pork-Chop Express, and the eccentric billionaire who has it! 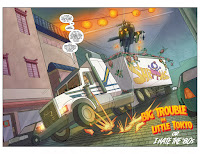 Max and Kassie delve into the Fiction for the first time in years to search for Tyler, only to find that the place that was once filled with the magic of childhood has become warped, corrupted, and filled with dangers they might not be able to survive.

There are many things that Rory would like to forget about his childhood growing up in rural Arkansas. Sometimes, he’d even like to forget about Joe, his mentally challenged older brother, both his closest friend and biggest problem. But when a young girl named Sylvia shows up, claiming to be a Valkyrie sent by the Norse god Odin to deliver Rory to Valhalla, he will have to face the past he’s tried to lock away.

Which side does Jen choose, Abigail or Rosie?! While Abigail tries to lure a monster out so she can kill it (which is all kinds of crazy), Jen goes to the bearwoman for help.

Having kidnapped the artist who worked with Jared’s father back in the ’80s, Jared and Killstrike have to infiltrate a comic convention to keep up appearances, and Killstrike receives tons of accolades for what appears to be the best cosplay of all time.

Steven Universe is just your normal everyday Beach City citizen—who is anything but normal! Join Steven as he learns how to save the day with the help of Garnet, Amethyst, and Pearl, discovering what it means to be a great friend and an even better neighbor. Written by Jeremy Sorese (Adventure Time) and illustrated by Coleman Engle (Regular Show), Steven Universe explores the magical world of the hit Cartoon Network show with all-new adventures sure to make your gem shine. Collects issues #1-4.