It has been foretold that four noble warriors of incredible strength would be gifted with cosmic abilities at a moment of planetary alignment…which, yeah, something definitely went wrong here. Amie is a disaffected twentysomething with a lot of attitude, Kevin is a washed-up athlete way past his prime, Sandy’s a mother of two teenagers, and Silas…is a goldfish. Just a normal goldfish. Are we sure we read that prophecy right? 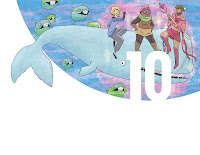 Finn and Jake are on the run, trying to figure out who on the inside framed them for the destruction of Peppermint Butler’s secret security team.

In the wake of the assault on Carapace’s headquarters, Dana and Aban arrive to investigate what happened to their allies, while Renfro, the killer who is the focus of the manhunt, stalks their every move.

In this new story arc, set between Seasons 1 and 2 of the television series, Opie, reeling from the death of his wife, goes back to his old job at the lumberyard, but discovers some shady business there as well, while Jax and Clay fight against external and internal heat to get their new deal with the IRA lined up.