The Fellowship has obtained sneak peeks for comics from IDW that will come out this week...

GO TEAM ’BEE! BUMBLEBEE leads an all-star team of AUTOBOTS to Earth to find rogue DECEPTICONS… but in this all-new story based on the hit Cartoon Network animated series, they find more than… they bargained for! (You thought we were going to say “meets the eye,” didn’t you?

Collects the adaptation of the second volume of R.A. Salvatore's The Legend of Drizzt! The Dark Elf known as Drizzt has abandoned the twisted society of his people to seek honor and justice!

Whole Again concludes, as Edward realizes that only he can rescue his new friends, even though it might mean sacrificing his best chance to be “normal.” But what's normal, really?

A disaster at Bartok Industries threatens to unleash a plague of human/fly hybrids on the world. Can the might of the U.S. Army prevent a full outbreak?

COBRA RISING! As G.I. Joe continues to mourn the loss of one of their greatest members, Cobra consolidates its power and brings long-departed villains back into the fold…

Teddy confronts her archenemy: her former boss, Tina, and launches a series of unprecedented temporal attacks to force Tina from her hideout, putting the safety of the world at risk!

Galahad finally knows who killed his mother, but why? Could it be that the man behind Nocturnus' mask isn't at all who Galahad believes him to be? 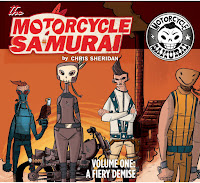 “Look hard into the storm clouds. You may yet see her, mounted on her electric steed, streaking past. The last hero of the West. The Motorcycle Samurai!” It’s been called “the new benchmark for indie digital comics.” Now discover the mad genius of The Motorcycle Samurai for yourself, as Chris Sheridan does the unthinkable: brings his creation to print! His boldly kinetic action will blow your mind.

“Night of the Living Apples,” Part 1! Something sinister is happening at Sweet Apple Acres! Bad apples have come alive and determined to take over all of Ponyville!

It's the mind-bending conclusion of “The Tholian Webs!” One crewmember makes the ultimate sacrifice to save the Enterprise in this all-new re-imagining of a classic Star Trek episode!

The prize-winning British cartoonist Julian Hanshaw makes his American debut with the rich and meditative story of Tim Ginger. Once a government test pilot, now a widow, Tim enjoys a quiet retirement in New Mexico… until a conspiracy theorist starts asking uncomfortable questions, and the haunting reappearance of an old friend provokes some hard choices about when to let go and when to hold on.

Casey and April struggle to keep their relationship afloat as they look for answers in the desert. Someone is striving to cut their journey short—the Rat King!

COSMOS UNLEASHED! A misunderstood AUTOBOT. A DECEPTICON space station. Cut off from their allies, SOUNDWAVE and COSMOS come face to face… alone.

“The Grand Canyon Conquest,” Part 1 of 2: When an old Klondike debt spirals out of control, Scrooge fears his fortune will be colonized by con men!

“The Search For the Zodiac Stone,” Part 1 of 12: In the start of a legendary Disney epic, Mickey and Goofy seek a mystic treasure that will soon ensnare Donald, Scrooge, and the Phantom Blot! Wild short stories with Donald, Gremlin Gus and more round out our first big issue!

Scully and Wynn's stay on an ice bound ocean liner comes to an abrupt end with the arrival of an army of nomadic wasters… but worse things lurk beneath the ice!