Jenny returns to Sleepy Hollow with an ancient artifact she’s discovered: a mysterious shard of metal with untold power. But as Ichabod and Abbie investigate, the artifact attracts a demonic biker gang called The Wild Hunt, ready to cut down anyone who stands in their way. 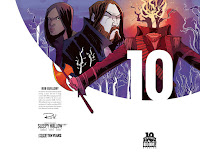 After an economic collapse and other disasters in the near future, Americans are now the legal and illegal immigrants living abroad. They find work in cities like Buenos Aires, where their very own enclave known as “Americatown” has taken root. Owen, a recent arrival, begins a journey to support and save his splintered family divided between the enclave and home back in the U.S. His struggle is just a small part of the hardships and conflicting agendas in an immigrant community trying to build itself in the shadow of a once great nation. 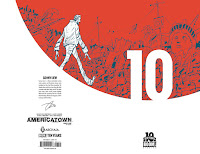 Corey, Sam, and Lee Garner are locked up in prison, while in the real world Valentin experiments with extracting an Arcadian and uploading them to the brain of a live mouse with horrifying results. 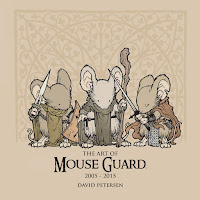 Celebrate the first 10 years of a comics classic from the very first sketch. For the first time since the series debut, David Petersen’s process for creating the world of Mouse Guard and bringing it to life in stunning illustration is documented in exquisite detail. With never-before-seen sketches; 100 pages of full-color, oversized artwork; and commentary from colleagues, collaborators, and Petersen himself, readers and fans get an unprecedented look behind-the-pages at how their favorite characters and adventures were born. 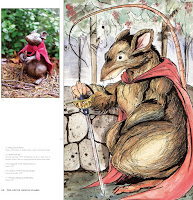 Final issue! Bill and Ted face off against Chuck De Nomolos in the future he controls for an epic Battle of the Bands to save the future of mankind! Features a back-up story by Brian Joines (Secret Identities) and Bachan (Rocket Salvage) about Princesses Elizabeth and Joanna going medieval on some troublesome rocker chicks from the future.

Penultimate issue! It’s the Bravest Warriors biggest adventure yet, and it’ll take all of them working together to make it through this one!

After a show-and-tell gone wrong, Clarence, Sumo, and Jeff get jobs to replace Kimby’s dollhouse.

When the water supply of Fraggle Rock mysteriously runs dry, Gobo, Red, Mokey, Wembley, and Boober will have to journey deep into the caves of Fraggle Rock to find the fabled Everspring. Along the way, they’ll encounter spooky creatures, discover the Crystal Caves, and meet a never-before-seen colony of Doozers! Collects the complete miniseries, issues #1-4.

When Sander discovers that his family is missing, Lizel informs him that they might be in the Underground, a dangerous city hidden in subterranean caverns beneath Lantern City.