In this first of four issues, we present a new Over the Garden Wall story set between episodes 3 and 4 of the animated series! Wirt and Greg are trying to hitch a ride out of schooltown but end up having to walk. Soon, they come upon two girls playing, and wind up having to keep them entertained so that they don’t wake their giant of a father! 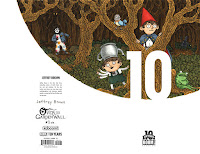 Finn and Jake break into Party God’s yacht to try and clear their names!

Jack Burton and Wang Chi’s daughter are on the run from the Alpha Group, Japanese river goblins, and an AI helicopter with the voice of Ronald Reagan! 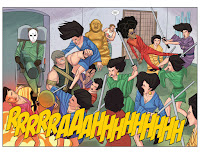 Crimson Vol. 1 HC
Writer: Brian Augustyn
Artist: Humberto Ramos
Crimson, the beloved series by Humberto Ramos (Amazing Spider-Man) and Brian Augustyn (Batman: Gotham By Gaslight), returns! For the first time ever in the prestigious hardcover format, experience Alex Elder’s ascension from vampire victim to “The Chosen One,” destined to bring about the end of all vampires! Collects the first 12 issues of the series.

Get a glimpse into the history of the hackers who stole the .sve_urs3lf handle.

With the Lumberjanes in danger, Jen must find a way to escape Abigail’s grasp and get to her troop in time! Meanwhile, Rosie and the Bear Woman must find the source of the Grootslang’s wrath, before it’s too late for everyone!

Spyke and Flower journey through a desolate, post-apocalyptic world. Each first-printing issue comes with an exclusive Munchkin game card!

Penultimate issue! The Sons’ big gun deal stalls when the SAMCRO gets caught up in a conflict with the ONH, a renegade Irish faction.