The three fates—Riata, Cait, and Smertae—have always been guiding and protecting Scotland unseen, indirectly controlling the line of kings according to the old religion. When there is a disagreement in the sisterhood, Riata and Smertae will use men as pawns, and Smertae will direct Macbeth to a crown he was never meant to have. 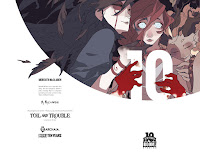 Final issue! Elena reaches the secret emergency rocket location that might help her reach her family, but she’s got cult members and security on her tail.

Midlothian is on the brink of a full-scale war between GOE and the rebels led by Samara and Grace.

Flood takes Berry out on an unusual first case for a crash course in his oddball techniques.

As the publisher love-triangle battle rages on for Muscle Man and Starla’s epic romance, Mordecai and Rigby create a fan-fiction homage to the story, with only small details changed, to make it end the way they wanted.

The Men of Gold, the alternate earth police corps that sentenced Requiem to a life sentence in the F.A.U.L.T.Line for his crimes against humanity, have decided enough is enough. If Requiem refuses to submit to their authority and accept his punishment as his due, they’ll do anything to ensure that justice is served. Even if they have to destroy Earth to serve it… Mike Carey (Lucifer, The Unwritten) and Elena Casagrande (Hulk, Hack/Slash) continue the mysterious superhero world of Suicide Risk in this fifth arc, which also includes the celebrated standalone story illustrated by spotlight artist Haemi Jang (Clive Barker’s New Testament). Collects issues #17-20.

Casey has a plan, and Calder is running out of time to stop him.