The memories of the thousands of people he killed as Bloodshot aren’t the only things that haunt Ray Garrison. For months now, the specter of the Geomancer and a nightmarish cartoon known as Bloodsquirt have tormented him at every turn. Are they real or a just figment of Bloodshot’s broken psyche? And just who are the other members of the Bloodsquirt’s squad…and what are they planning next? Follow New York Times best-selling writer Jeff Lemire (THE VALIANT) and special guest artist Raul Allen (Hawkeye) down the rabbit hole right here for an essential chapter of the “Colorado” epic! 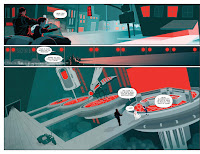 The telepathic mastermind. The alien assassin. The mercenary super-soldier. The mad scientist. And the killer robot with a soul. Toyo Harada has collected the monsters that will make his vision of world peace a reality. Now he pursues the most difficult and desirable asset of all – the spaceman with all the powers of a god – the outcast who can rewrite reality with a thought – the man who is no longer a man – the all-powerful being who is simply called Divinity.