Everyone should feel safe in their own home, but what do you do about the evil lurking in someone else’s house? Mike Carey (Suicide Risk, The Unwritten) and Mike Perkins (Deathlok, The Stand) team up for the first time in over ten years for the haunting thriller Rowans Ruin, debuting this October from award-winning publisher BOOM! Studios.

“Carey and Perkins are both incredible talents and we’re very excited to see this dream team collaborating on a new series,” said BOOM! Studios Editor-in-Chief Matt Gagnon. “Rowans Ruin combines horror, unsettling thrills, and great characters in a macabre story that starts with a bang and doesn’t let up.”

Katie has always had things pretty easy, growing up in comfortable circumstances in Florida. But when she finds herself with a long summer break before grad school, she decides to do a house-swap with a British girl, Emily, as a way to vacation relatively cheaply—and to get out from under her parents’ attentiveness. England is great, so different from Florida, and the house, called Rowans Rise, is charming. But soon she starts having nightmares—really, really, strong ones. Curious, Katie researches the owners of the house, and discovers it may have more of a sinister history than she thought...

The Final Order Cutoff deadline for retailers is September 14th. Not sure where to find your nearest comic retailer? Use comicshoplocator.com or findacomicshop.com to find one! It’s also available for order directly from boom-studios.com. 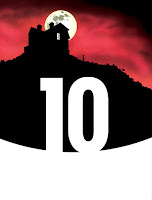