Dee Diesel isn’t very good at anything. The daughter of the late Tungston Diesel, she has yet to live up to her father’s great reputation. Her rival has inherited control of her family’s airship and left Dee the only job she’s qualified for: working in a two-bit garage. But all that changes when a mysterious flying engine crashes into Dee’s life and takes her on a journey through the skies. 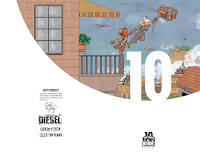 As Owen struggles to survive in his new home, all he can think about is where his son might be.

Final issue! The Bravest Warriors face Bugcat one last time in the darkest depths of the galaxy with entire planets at stake! Featuring a back-up story by Jason Johnson, one of the show-runners behind Bravest Warriors.

Final issue! During a neighborhood BBQ Clarence, Jeff, and Sumo find an empty refrigerator box on the sidewalk that they turn into a teleporter!

A terrifying, monstrous biker gang known as the Wild Hunt has marked Crane and is coming after him and the mysterious artifact.