Based on the cult film, Trancers is the story of decorated Police Trooper Jack Deth who has travelled from the year 2247 to 1985 Los Angles on a one-way mission to capture a fugitive with the power to transform ordinary people into psychotic killing machines. 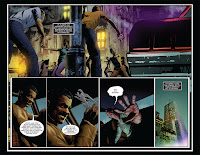 Fall, Part 5: “Pantry Raids”  Poppy and Cassia, the teen masterminds behind the addictive Patty Cake brownies, hoping to better understand their product, violate one of the 10 Crime Commandments: they try their own supply. Also, with this issue we welcome new series colorist/letterer Josh Eckert!

Raven finally has a crew and is ready for cast off when an old friend and his rambunctious daughter come under threat from the town guard.  There’s too many to fight and they’re too heavily armed.  How will Raven and her crew save one of the only allies they have?  Variant cover limited to 2000 copies!