Jen takes the girls on a nature walk to show them which plants are edible in case they need to survive in the wilderness. Along the way, she tells them the story about an axe murderer who took his friends out, one by one until no one was left, thoroughly scaring Mal. Terrified and unable to sleep, Mal thinks she sees something lurking outside. Is it…THE AXE MURDERER?! In the second story, Ripley recounts how she saved Jen’s life—but did it go down as fantastic as she claims?

Ice King and his cool wizard pals make it to Marble’s lair and a battle ensues.

From John Carpenter, legendary director of the original classic film, writer Eric Powell (The Goon), and artist Brian Churilla (The Secret History of D.B. Cooper) comes a collection of the final four issues of their run. As if sacrificing himself to end Lo Pan’s reign wasn’t enough, Jack Burton must now face his greatest challenge yet: the Hell of No Return. Luckily, Jack does have one companion in this eternity of endless torment. The very person he offed to get here, Lo Pan. When archnemesis becomes forced ally, Hell becomes the least of Jack’s problems. Collects issues #9-12. 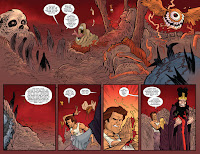 A Russian candy wrapper and a two-dollar bill send Goldie on a search for a missing guest.

With Rosie and the High Council being stolen away, Jen suddenly finds herself in charge of the camp!

Marta begins to link everything together and realizes that no one is innocent in the post-Management world.