Something stranger than usual haunts Full Moon Hollow, Paranormal Capital of the World. Adults either can’t see it, can’t remember it, or go crazy from it. So when zombies attack during the Hemlock County Scouting Jamboree, only a group of misfits can save the Hollow. Be prepared. Be very prepared.

The event five years in the making! Only one force in the universe can bring Jake Roth (from THE F1RST HERO), Molly Danger, Virtue (from FRACTURE), Midnight Tiger and Stray together. When the mysterious Cascade threatens the universe, Action Lab’s greatest heroes heed the call! But as the mystery of Cascade’s power deepens, only Molly’s arch-enemy, Medula, holds the answers--but in their darkest hour, will he be friend or foe? Collects Actionverse #0-6.

Raven and her crew cast off to the high seas and the adventure of their lives! But before they can take on Raven’s brothers they’ll have to learn where they are and what’s happened since Raven was locked away. So they’re headed to Raven’s ancestral home island,“ The Island of the Free Women”. It’s swamped with every kind of thief, assassin, and despot. Can Raven’s crew face their first challenge? Can they even handle being cooped up in the same ship together?

The final issue of the first VORACIOUS story arc! Nate gets interviewed by the local news about the success of his restaurant and Captain Jim discovers that time travel always has consequences… 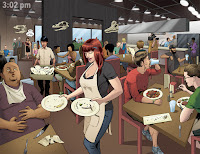