Ex-Slave Marcus and Tara the Gypsy Girl are hot on the trail of the vampire known as the White Man. Along the way, they stumble upon a traveling freak show with a head-liner called The Human Wolf, who may be a pitiable freak of nature — or something much, much more deadly!

THE BIGGEST BANG rages on as Cosmos is tries to dissuade the misguided Cosmic Church of the Half-God from worshipping him! There is definitely more going on than meets Janishire Sneck's giant eye. And who, or WHAT are The Penumbra...? Meanwhile, Wyan continues to explore the possibilities of her amazing new powers, becoming a hero in her own right! It doesn't get bigger than the BIGGEST, cosmic comics fans!

A Spoon Too Short sees Dirk Gently take on rhino poaching in Kenya and The Tribe With No Words, while confronting untold secrets from his childhood. The world’s weirdest detective proves there is no such word as impossible in his dictionary!

Beloved cartoonist Robert Fun has earned a devoted following for his circle-shaped newspaper comic strip, celebrating the wholesome American family by drawing inspiration from his real home life... but the Fun Family bears some dark secrets. As their idyllic world collapses and the kids are forced to pick up the pieces, can they escape the cycle of art imitating life imitating art? In his debut graphic novel, Benjamin Frisch presents a surreal deconstruction of childhood, adulthood, and good old American obsession.

There’s something strange going on in Puerto Rico, and the FBI wants it investigated! Egon Spengler joins Kylie Griffin and FBI Special Agent Mel Ortiz on the Isle of Enchantment to chase down a gruesome ghoul that could be even worse than it appears! A special stand-alone issue featuring the artwork of British phenom Rachael Stott (Star Trek, Doctor Who)!

Join special guest host Mike "The Howler" Howlett for this sordid selection of Pre-Code Horror screamers! Artwork from Basil Wolverton, Sid Check, the Iger Shop and other horror masters bring you eight envelope-pushing tales of grue and gore from the days of yore. The twist here is that all of these stories were redrawn in the 1970s by the slimy Eerie Publications staff! The publishers of Haunted Horror assume no responsibility if your eyes pop clear out of your skull.

While Costello works on his escape plan to get out of Hell, Teddy is fast becoming bff’s with Satan, who’s actually so nice, you guys. Heaven, on the other hand, is a real mess thanks to a couple of rude angels. But hey, who likes reanimated corpses?!

DARK JEM PART—concludes! PIZZAZZ rejoins THE MISFITS in time to confront looming threat of Silica. But it will take everyone working together—and performing together—in one SUPER SHOW to stop Silica and The Sickness’s spread once and for all.

Mega-City Zero, Part 7! Dredd and his companions enter the Zone of Correction, where everything has a rule attached, in “Grammar Nazis”!

The Martians came. The Martians saw. The Martians conquered. Now the space invaders cruelly rule over humanity, which has no hope for liberation... until Ruby Johnson decided she had enough and started fighting back.

The universe is being torn apart and the MICRONAUTS are caught in the middle! They find themselves prisoners... er, guests... of the enigmatic FORCE COMMANDER, leader of the SPACE GLIDERS, who has a connection to Captain Oziron Rael—one that makes Rael a target for BARON KARZA and his ACROYEARS!

When Twilight visits her sister-in-law Cadance in the Crystal Empire, she’s surprised to find that something is bothering her sister-in-law but she won’t say what! Twilight must find the reason behind Cadance’s loss of self-esteem before the Empire itself becomes imperiled!

The Rocketeer dons his helmet and soars into action to foil the Nazis’ plans to destroy New York City. But can even the jet-packed marvel defeat the combined might of the Axis powers and their diabolical PROJECT BEDLAM? Find out in the thrilling finale of…THE ROCKETEER AT WAR!

The final matchup of the World Warrior Tournament, and the fate of the planet rests on the victor! Will the forces of good prevail… or will M. Bison and Destro reign supreme and enact a New World Order? The greatest Street Fighter X G.I. JOE battle ever is about to begin!

“Muck Amok Part 1” Muckman thinks he may be finding his groove as a crime-fighting mutant. However a new trash-collecting invention from Baxter Stockman may prove him wrong! Will the Turtles be able to intervene in time?

Time has been irreparably damaged and the fabric of reality is torn apart! Only a trip to visit the Time Lords in the 79th dimension holds any hope. But is time-traveller Renet still alive? Are the Turtles? Is anyone??

THIS IS THE END! Will PROWL get his comeuppance? Will TARANTULAS conquer all? Will any of the WRECKERS survive? It’s wreck and rule one last time, with everything on the line!

THE END IS NIGH! Final battle erupts—the forces of G.I. JOE and the AUTOBOTS head-to-head (or head-to-toe, depending on the size difference) with the DECEPTICOBRA alliance! The fate of the universe hangs on every decision!

“Scrooge’s Last Adventure,” Part 4 of 4! The day of reckoning is here! Uncle Scrooge vows to take back his fortune—and Duckburg—from Flintheart Glomgold and John D. Rockerduck! But the enemy tycoons promise a bruising battle... 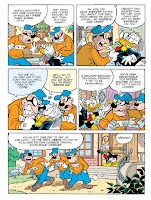