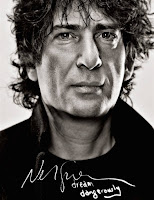 Sequart Organization and Respect Films are proud to announce that their newest documentary, Neil Gaiman: Dream Dangerously, has been picked up by Vimeo. The film is now available for pre-order (https://vimeo.com/ondemand/neilgaiman) and will be released on July 8th. (Customers who pre-order will get 10% off by using the code NEIL10.)

Neil has committed his life to creating meaningful art and telling stories that resonate with audiences. Dream Dangerously explores his love of writing, as well as the inspirations for his most notable stories, all while providing a fly-on-the-wall look at his epic final signing tour.

Neil is represented at CAA by Jon Levin and is managed by Merrilee Heifetz.