Sleigher is the most recent (and reluctant) heir of the centuries old lineage to bear the title of “Santa Claus.”He'd rather slam back bourbon than glasses of milk, and blast metal instead of carols. But when evil rears its head before he's delivered a single present, maybe he's found his true calling — dishing out a holiday ass whoopin'!!!

Tim from Finance is about to be kidnapped by evil infiltrators. Can the heroes from Super Crises International save him in time? Spoiler Alert: No, because they’ve already gotten themselves kidnapped by aliens. (Sigh.)

With Jessica's life on the line, Addison makes the dangerous decision to confront the corrupt Detective Tico and his partners. Shocking choices must be made and Addison's pursuit of justice forces her to face a rather monstrous truth about her dedication to the cause.

Vampblade’s in for the fight of her life… instead of facing more mindless monsters, an all-new super deadly sword wielding foe crosses blades with Katie. Who or what is Mom Spaceknight, and why is she unleashing cosmic hell on our cosplaying slayer?!? 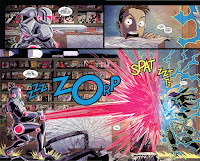 Stuntwoman Zoe Dare is finally en route to the Disasteroid alongside a team of highly trained astronauts—and her archrival, Race Thunderbuckler! Meanwhile Danni Dare mans the controls in the NASA Comms Room (to the chagrin of Agent Tarney Winfield), but what awaits the crew on the impending space-rock will shock them all to the core! 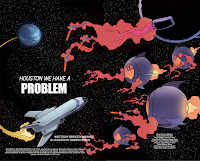