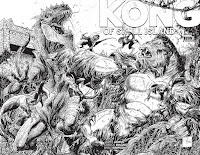 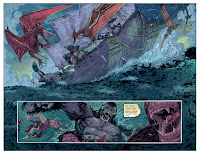 Finn and Jake are sheriff and deputy of a wild west town...or are they? Is this even real?! 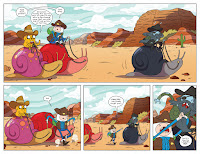 The Bravest Warriors get a distress call to a planet with a giant monster problem that turns out to be more than they can handle on their own. Luckily, they befriend a brilliant local scientist named Peach who also happens to be a huge fan of the team. So much so, she’s built each of the Warriors a colossal robot to pilot and take the fight back to the monsters! It’s giant monsters versus giant robots with the Bravest Warriors at the helm! This volume features the debut of Catbug’s evil brother Bugcat! Collects issues # 25-28.

Dana Atkinson, a dishonorably discharged army investigator, is pulled back to the Middle East when a group of American oil technicians disappear under bizarre circumstances. With the help of an Iraqi investigator, Dana discovers a series of unimaginable incidents at the drill site which have caused a mythic evil to be released, one that threatens both the lives of the entire region and the fragile peace that exists. Collects the complete limited series.

Now an ongoing! Goldie discovers the truth behind Ludwig’s disappearance, but will she be able to find him before someone else does?

What the junk—Jen is missing?! The Lumberjanes and Gotham Academy crew regroup at camp to figure out how to find their missing friends.

After working the same convention circuit for decades, a ragtag group of flabby action heroes, aging sex symbols, and sci-fi bit players become close friends as they watch their lines get shorter and their autographs get cheaper. That is, until they hire a cocky new booking agent who offers them their only chance at a comfortable retirement: robbing one of the largest cons in the country! Collects the complete limited series.

As Sid and Frankie hunt down a lead, Sid does a little digging in secret from the Weavers.