Justin Jordan (John Flood, Spread) tackles a provocative topic—the violent drug cartels of Mexico—partnering with artist Raúl Treviño, who lives in Mexico and is drawing on his first-hand experiences to inform the story.

A DEA agent who disappeared in Mexico years ago has resurfaced and is now out-brutalizing some of the cartels he was sent to investigate. His daughter has been tasked with stopping him…by any means necessary.

Perfect for fans of Scalped, the novels Heart of Darkness andSavages, or the film Apocalypse Now. Also available in a Spanish-language edition.

From Archaia, the publisher of fine fantasy stories like Mouse Guardand Jim Henson’s Tale of Sand, comes a grand adventure story filled with unexpected allies and enemies alike. The Cloud is an original graphic novel that beautifully examines themes of strength, bravery, love, and loss. Fans of Kazu Kibuishi’sAmulet or the beloved children’s fantasy The NeverEnding Story will delight in The Cloud.

"What is a wish?” That is the question the boy must answer for himself as he and his loyal wolf, Cloud, embark on a grand voyage to find the boy’s father and return the wish that was stolen from him.

The Cloud is a beautiful, and at times, heartbreaking journey of a reluctant hero forced to outwit a cast of colorful characters: a thieving girl, bizarre creatures from the Great Before, and the Mad King. It’s a quest of self-discovery where the boy will learn that not all wishes can or should come true. 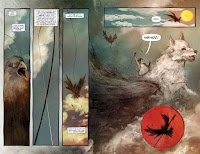 Divorce is always a tricky subject, more-so when you’re one of the wealthiest geniuses in the modern world.

Dewydd and Catrin explain their pasts to Uma, who might have to continue the joyride on her own.

Calling all process junkies! If you’re as much a fan of the behind-the-scenes process of illustration as you are of the finished product, you will love this in-depth look at the making of the critically acclaimed Klaus.

This next installment of the Pen & Ink series collects Klaus issues #1-2 in an oversized, 11” x 17” format that features Dan Mora’s detailed inks alongside new commentary and creative insights from Mora and writer Grant Morrison. 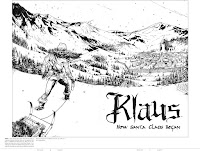 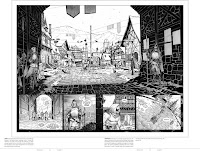 Sander Jorve thought that infiltrating the brutal Guard of Lantern City would help his family and his cause. He was wrong. After a chance run-in with the Emperor of the city, Killian Grey, Sander finds himself promoted to the Grey Guard, working directly under Killian in the heights of Grey Towers. The luxury is unparalleled, but can Killian be trusted? Can Sander trust himself? Nowhere in Lantern City is safe...and the imperial court may just be the most dangerous place of all. Collects issues #5-8 of the steampunk epic.

Lucas is sent back to 1943 Occupied France to kill a demon, but must avoid altering history in the process.

The Roanoke cabin have a heart-to-heart with the Zodiac cabin before going to save the High Council.

Before there was Tommy Oliver, Rita had her sights set on someone else to become her Green Ranger in this stand-alone issue! Guest artist Thony Silas (Venom) reunites with his Batman Beyond 2.0 partner Kyle Higgins.