Stories include Garfield venturing out as a Nighttime Crusader, fighting his own impulse control, and going up against “The Most Annoying Cat in the World.” Plus, Nermal is seeing double—does he have a twin he never knew about?!

Oh My Glob! We’ve unleashed some of the industry’s best cartoonists loose in the Land of Ooo to share their most algebraic stories in their own voices! The first issue is so math thanks to Katie Cook (My Little Pony: Friendship is Magic), Tony Millionaire (Sock Monkey), and Art Baltazar (Patrick the Wolf Boy). You’re lumping welcome! Future issues of this ongoing series will feature radical stories from Jeffrey Brown (Darth Vader and Son), Terry Moore (Strangers in Paradise), Kelly Thompson (Jem and the Holograms), Box Brown (Andre The Giant), and more!

Once a Ranger, always a Ranger. Kimberly must embrace her past to become the hero the world needs. The return of Angel Grove’s original Pink Ranger is here.

Spyke and Flower are off to see the wizard, the wonderful wizard of...dropping a ton of loot!

Greg tries to stop a man from cutting down all the trees for his enormous treehouse, while Anna has to deal with her mother’s ghost and the disappearance of her friend. 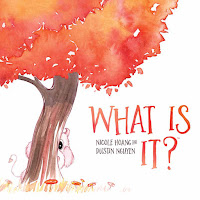 In a nearby forest, a young girl discovers a mysterious little creature. Together they seek to understand who or what the other is. Featuring beautifully painted illustrations by Dustin Nguyen, What Is It? is a story of wonder, discovery, and the joy of making new friends.

As survivors of the alien invasion of Lower Crowchurch try to cope with what happened to their small town, the military arrives in an attempt to cover up the “incident.” Town residents are immediately detained, questioned, and treated with suspicion. Clive, Susan, and the others will need to escape imprisonment if they’re to get the word out and warn the rest of the world before the aliens return. Collects the complete limited series.