Ah, the City of Townsville, home to none other than: THE POWERPUFF GIRLS! But things have been pretty calm lately… So much so, that Blossom, Bubbles, and Buttercup have fallen out of the public eye—which makes it the perfect time for their super-simian arch nemesis Mojo Jojo to take over and win the hearts of millions, backed by his army of paparazzi! 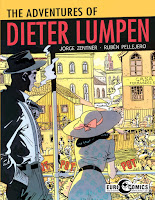 The Adventures of Dieter Lumpen

The first English translation of the entire Adventures of Dieter Lumpen series, the most famous work of the Angoulême award-winning team of Jorge Zentner and Rubén Pellejero!

Dieter Lumpen is a man of the world, an adventurer who wants no part of adventure. Nonetheless, he is swept along to exotic locations from Turkey to the Caribbean, from China to Venice. He is not quite so hard-boiled as the typical adventure hero. As written by Zentner, Dieter’s irony is gentler, more subtle, more reflective, and more tongue-in-cheek than hard or bitter. Pellejero is quite simply one of Europe’s top comics artists, who was chosen for the plum job to illustrate the new adventures of Hugo Pratt’s Corto Maltese. Dieter Lumpen began in 1981 and continued until 1994.

This definitive omnibus collects all eight short stories and the three graphic novels with a foreword by Tim Sale. 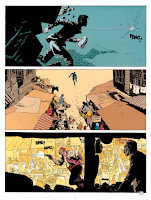 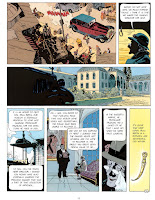 A military pilot from a radioactive, alternate future has arrived in Berlin 1945, and the corrupt officials from his world want him stopped. Though he won’t reveal the details of his mission, he’s made one thing clear: our entire reality is at stake.

DOC’S STORY! Is he a man out of time? A visitor from another reality? An alien? A robot? Eighteen hyper-intelligent hamsters in a rubber human suit? Well, definitely not the last one—but the mystery of memoryless Doc Brown is solved... just in time for things to really get exciting.

Adapts the first volume of the best selling trilogy. Two years have passed since the War of the Lance. A relative peace has settled on the world. Yet, all is not well in the land of Krynn. An ambitious mage and the beautiful cleric who hopes to save his soul depart on a desperate journey through time that threatens to undo history and bestow godhood to one who craves power over everything else. This is the story of the Majere Twins, Raistlin and Caramon. A story that may serve to destroy all.

The Baldur’s Gate heroes struggle against the forces of dread as the darkness of Ravenloft takes hold of their hearts and minds. What good is survival if it means losing your soul?

First Lady Amelia Greene has been suffering from horrific visions—visions of herself transforming into something unnatural and bloodthirsty. As the hallucinations worsen, she seeks professional help, but this all must be kept secret for fear of a political scandal. While her husband and members of the White House staff grow increasingly concerned, Amelia learns those closest to her know more about these visions than they let on.

The man who bankrupted Galahad has been caught—but when Nocturnus finds out what the money was used for, he knows that a city will burn!

LONELY? THERE'S AN APP FOR THAT. Reeling after a breakup, young animator "K"
is pushed by a friend to join the popular dating site Lovebug. His journey begins as a search for true love, but soon awakens a relentless craving for novelty and sexual conquest.

With the touch of a button, K embarks on a dating spree, browsing a digital marketplace of the flesh. Who can stop when Lovebug offers an endless stream of prospective mates, sorted by algorithms and stored on a distant server, ready on demand like TV episodes or Chinese takeout? And in the face of this addiction, can K hold on to his friends, his job, or even his humanity?

The acclaimed author of In the Flesh and The Abaddon presents an evocative tale of modern love... in a world where even full bars can lead to a bad connection.

Things begin to spin out of control and things start to get weird—which is saying a lot for this book! And introducing Mickey, Dude, and a villainous man in a diaper named Uncle Freddie... and three oranges.

Mickey Mouse Shorts: Season One #1 (of 4)
Based on the animated series by Paul Rudish (w & a)
Scott Tipton (adaptation)
Andy Suriano (c)

Join Mickey, Minnie and all their pals in a comic adaptation of the celebrated, multi-Emmy and Annie Award-winning shorts from Disney Television Animation! In this issue, Mickey battles his way through a Tokyo bullet train during rush hour, an unlikely character competes in a dog show, and Donald suffers from….Flipperboobootosis?! And that’s just the start! 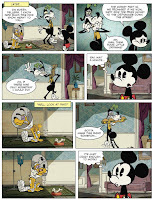 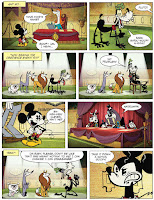 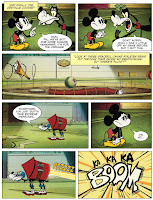 Amidst the smoking ruins of Asgard, the Black Elf assassin, Regn, stands ready to avenge his daughter’s death by killing the God of Thunder, who may or may not hold the key to the resurrection of his dead child.

We look to the past, as Lilly and Eva deal with an ugly truth about a fallen Earth. In the present, Lilly recruits a team to spy on that huge ship on the far side of the gas giant…and find out just what they want!

Don't miss Part 1 of the 2-part SERIES FINALE! It's the penultimate chapter in the latest Five Year Mission of the U.S.S. Enterprise, as Captain Kirk and the crew encounter... themselves? Celebrate the 50th Anniversary of STAR TREK with this all-new story that brings two timelines together!

Photo-artist John Byrne puts his skills to use in a unique way in this extra extra-length tale, reinterpreting and adapting the original Star Trek episode “The Cage” to comic-book form. Celebrate Star Trek’s 50th anniversary by revisiting where it all started, in this one-of-a-kind storytelling style!

“Muck Amok Part 2” Now giant-sized, cybernetic, and out of control thanks to Baxter Stockman’s tinkering, Muckman is now a Muck Mecha! Can the Turtles and Joe Eyeball get through to their friend before all of NYC becomes a garbage dump?

“Night of the Living Text!” The fourth wall breaks as Mickey and Goofy discover they’re really living in a comic book story—with scary plans for them both! Then Donald Duck and Gyro are “Swallowed Whole” in a new William Van Horn adventure!

Ishmael, Part 1 of 2: Agent Scully finds herself the target of a stalker, who also threatens to reveal a dark family secret that she’s even kept from her trusted partner Agent Mulder.