Myshka’s plot to reengineer the globe in Russia’s favor is all but complete. Will Abram Adams – the god-like being now called Divinity – stand against his former comrade…or, together, will they reshape the world as we know it with hammer and sickle in hand?

The sold-out sci-fi epic that redefined the Valiant Universe charges into a showdown for the fate of reality itself as New York Times best-selling writer Matt Kindt (4001 A.D.) and explosive artist Trevor Hairsine (X-Men: Deadly Genesis) reach a defining moment for comics’ most captivating new hero!

The war against Father turns in favor of the 41st century’s revolutionary heroes as Rai finds his long-lost friends aboard the monstrosity that has become New Japan. But even together, can Rai and his allies stand against Father’s defenses? And can they rescue what remains of New Japan before it crashes down to Earth and destroys everything…and everyone?

The countdown to X-O MANOWAR #50 continues as “LONG LIVE THE KING” escalates!

They’re here! The Torment – a world-devouring race older than history itself — has arrived on Earth. And now, all that stands between our existence and complete annihilation is Aric of Dacia, heir to the Visigoth throne and wielder of the X-O Manowar armor!

But as the Torment unleash a wrath unlike anything the galaxy has seen, even Earth’s most powerful protector will find himself hopelessly outmatched. With humanity standing on the brink of extinction, X-O Manowar must turn to his greatest adversary for help – the savage Commander Trill!

Plus: The X-O MANOWAR #50 COUNTDOWN GIVEAWAY continues right here! Each issue of “LONG LIVE THE KING” comes bagged with one of 50 micro-prints – featuring artwork from a who’s who of comic superstars – or even one-of-a-kind original art! 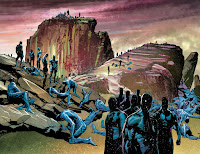