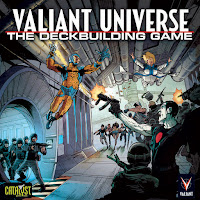 Debuting this week at Gen Con 2016, Valiant Entertainment is proud to announce the release of VALIANT UNIVERSE: THE DECK BUILDING GAME – the latest tabletop game created in collaboration with Catalyst Game Labs! Following the success of the critically lauded VALIANT UNIVERSE RPG, Catalyst Game Labs and Valiant are taking their partnership to new heights with the next astonishing game featuring your favorite superheroes! Command the Valiant Universe like never before with the first series of highly detailed figurines from the Valiant Universe, including X-O MANOWAR, FAITH, LIVEWIRE, BLOODSHOT, and NINJAK, and immerse yourself in strategic deck building gameplay that includes over 200 unique playing cards!

Deep beneath Alcatraz prison lies a top secret base operated by the paramilitary contractor known as Project Rising Spirit. Known only as “the Facility,” P.R.S.’s secret bunker is armed with enough power to change the world—or destroy it. When word of the subterranean facility leaks, the Valiant Universe’s most powerful groups, including The Harbinger Foundation, G.A.T.E., and the Harbinger Renegades, race to acquire the deadly possessions and put the fate of the world in their hands! With a cataclysmic confrontation imminent, take control with your warring team and claim P.R.S.’s base for yourself! As the Valiant Universe’s greatest heroes fight at your command, move your superhero miniatures through an interactive facility grid to acquire cards for an unbeatable deck and attack your opponents in a world-shaking battle for supremacy!

"We're incredibly excited to have gamers and fans take control of the critically acclaimed characters of the Valiant Universe," said Russell A. Brown, Valiant’s President of Consumer Products, Promotions, and Ad Sales. "We're incredibly happy to be continuing our partnership with Catalyst Game Labs, and to be creating another immersive gaming experience with exciting features, innovative gameplay mechanics, and finely sculpted figurines that are collectibles in their own right. The level of quality that Catalyst has put into this game is astounding, and ensures that fans new and old will get a superb gaming experience set in the Valiant Universe.”

As your favorite heroes and villains assemble for an unprecedented battle royale, determine the very fate of the Valiant Universe with a jam-packed gaming experience exploding with the following items:
Five highly detailed superhero miniatures, including X-O Manowar, Faith, Bloodshot, Livewire, and Ninjak!
X-O Manowar! Bloodshot! Faith! The entire Valiant Universe is yours to direct in a table-shattering game that will leave you reeling for hours! Available online and in hobby shops everywhere this September for $59.95, assemble your deck, control your heroes, and enter the fight of your life withVALIANT UNIVERSE: THE DECK BUILDING GAME, the latest astonishing tabletop game from Catalyst Game Labs and Valiant Entertainment!

Plus: Preorder your copy of VALIANT UNIVERSE: THE DECK BUILDING GAME now, and receive a limited edition figurine of RAI, Valiant's critically acclaimed hero of the 41st century, and the star of 2016's best-selling summer event, 4001 A.D.!