Wynonna Earp and Doc Holliday have faced off against demons and Revenants, but nothing can prepare them to square off against the infamous Pinkertons. When Doc catches wind of an abandoned stash of gold from a train robbery, he and Wynonna race to track it down before Pinkerton agents get their hands on it. Beau Smith and Tim Rozon, Wynonna Earp’s Doc Holliday himself, bring fans a tale of unlikely team ups, thrilling shootouts, and the occasional make-out session in Wynonna Earp Legends: Doc Holliday!

“Hammer of Magic!” A wild new Disney miniseries starts here! In the steampunk warrior world of Feudarnia, only the Magnus Malleus can save humanity from marauding Meteorbeasts! It’s an epic weapon for an epic hero... so why is it up to Donald Duck to grab it before Magica De Spell, the Beagle Boys, and the Phantom Blot get there first? 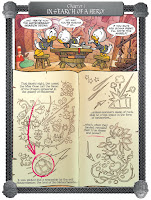 Snake In The Grass, Part 5
Dawn begins her training with the Arashikage clan… while Duke’s wife, Claire, finds herself in the most dangerous position, and not even G.I. Joe might be able to save her this time!

Travel back to the age of monsters to discover the secret origins of the monsters! The mysterious circumstances behind their arrival may spell doom for mankind in the present!

THE STINGERS part 3! JEM AND THE HOLOGRAMS search for Shana’s replacement as Shana gets everything she hoped for… but is it what she really wants? Meanwhile, somebody knows exactly what Shana wants—and that’s gonna cause problems for everyone.

The finale of “Mega-City Zero” is here! Dredd gets a look behind the curtain and nothing will ever be the same, in “The Wizard of Odds”!

“Fantametal Phantoms”: Mickey’s classic title is back from hiatus—with fan favorite Andrea “Casty” Castellan and Mickey’s rowdy explorer pal Eurasia Toft on board! Mickey’s out to find Atlantis or die trying... and yaarrr! There be pirates, pitfalls, creepy Count Zoox, and the hideous Horde of the Violet Hare!

Pinkie Pie and Cheese Sandwich get trapped in a magical house that loves to party! But will it ever let them leave?

Fred Allan has been taken by the children of the monsters he’s killed. Now he learns their twisted plan and it’s up to the Allan Family to find him before it's too late.

The Revolution is ended. Rom is more alone than ever in his fight against the Dire Wraiths? Or is he? Introducing two armored faces very familiar to Rom… but whose side are they on?

Bake a leg! When a film crew arrives to interview Berry Bitty City’s favorite baker, Strawberry Shortcake, what they find is a heated rivalry between her and the Purple Pieman that might be the award-winning film documentary the crew was looking for!

James Kochalka leads his team into “The Stupid Zone” as only he can… Also features an overheated back-up tale by Rachel Lindsay!

“Chasing Phantoms” Part 4! The war between the Street Phantoms and the Foot Clan comes to a shocking conclusion, and only one will remain when the dust settles! The Turtles will test their limits in a shocking finale!

Transformers: Till All Are One #5
Mairghread Scott (w)
Sara Pitre-Durocher (a & c)

REVOLUTION is over but the danger isn’t over! A wave of undead TITANS threatens CYBERTRON! STARSCREAM will need more than secret police to stop the oncoming horde, but our Fearless Leader finds himself short on friends and firepower. Who can be called upon—and why aren’t they stepping up to the plate?