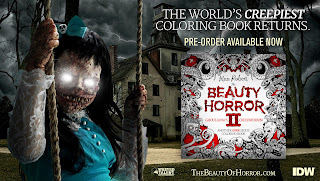 Following up his #1 best-selling adult coloring book The Beauty of Horror, creator and Life of Agony bassist/songwriter Alan Robert has just unleashed a twisted new trailer for Volume Two in the series, titled The Beauty of Horror 2: Ghouliana's Creepatorium - Another GOREgeous Coloring Book.

Check out the trailer, here: https://vimeo.com/alanrobert/beautyofhorror2

Nerdist hailed Robert's debut as being "The World's Creepiest Adult Coloring Book" and it received critical acclaim in The Wall Street Journal, GQ, and BuzzFeed. Ghouliana’s Creepatorium continues the journey of everyone's favorite undead girl, Ghouliana, as she mischievously attempts to trick budding colorists into unleashing her deadly spell. Ghouliana has secretly sprinkled her haunted ingredients throughout 80 pages of Robert's original pen and ink illustrations. The Beauty of Horror 2 features a beautifully chilling red-foiled cover and high-quality paper that will ensure the pools of blood you color don't leak through the pages. Robert and IDW have come together to present a deluxe coloring experience.

“Bringing Ghouliana to life on set was such an incredible experience,” Robert says, “I think it just may be the beginning of seeing her in the flesh!”

"Alan has topped himself again," says IDW VP of New Product Development, Jerry Bennington. “Not only is the coloring book twice as creepy as its predecessor, but the trailer ups the chill factor to nightmare-inducing levels to satisfy horror fans everywhere."

The Beauty of Horror 2: Ghouliana's Creepatorium, Another GOREgeous Coloring Book by Alan Robert arrives in stores this September from IDW Publishing. http://www.thebeautyofhorror.com