RAI: THE HISTORY OF THE VALIANT UNIVERSE #1
Written by RAFER ROBERTS
Art by FRANCIS PORTELA
Cover A by CLAYTON CRAIN
Cover B by CLAYTON HENRY
Variant Cover by ROBERT GILL
Variant Cover by JEFFREY VEREGGE
Ninjak Vs. The Valiant Universe Variant Also Available

Rai, the spirit guardian of Earth, has uncovered an ancient tome filled with history’s greatest tales and civilization's darkest moments. Charting the dawning days of ancient Mesopotamia, all the way to the rise of New Japan, the history of the Valiant Universe is laid bare in shocking and revelatory detail. From X-O Manowar to Bloodshot to Faith to Divinity…history will reveal untold revelations for Valiant’s greatest heroes and antagonists!

In the tradition of the original RAI #0, Harvey Award-nominated writer Rafer Roberts (HARBINGER RENEGADE) and acclaimed artist Francis Portela (FAITH) unleash a celebration of Rai’s 25th anniversary with the third of four standalone specials honoring the most famed Valiant stories ever told! 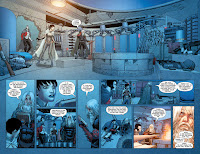