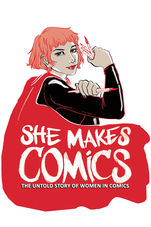 Sequart Organization and Respect Films are proud to announce that She Makes Comics is now available on iTunes, Amazon VOD, and cable VOD.

Directed by Marisa Stotter, She Makes Comics traces the fascinating history of women in the comics industry. Despite popular assumptions about the comics world, women have been writing, drawing, and reading comics since the medium’s beginnings in the late 19th century. And today, there are scores of women involved in comics and its vibrant fan culture.

The documentary has received rave reviews and won Best Documentary at the 2015 Comic-Con International.

What the critics have said about the film:

· “Entertaining, informative, and inspiring. Drips with passion for the comic book medium and for the fight against the sad realities that have plagued women in the industry for decades.” — Cliff Wheatley, IGN

· “I can’t stress enough how important it is that you see this film, and more than that, that you take its message with you after the credits roll. She Makes Comics lets any woman watching know that she too is accepted, that she is welcome here… 10/10.” — Timothy Merritt, Coming Up Comics
· “An uplifting and informative celebration of women in comics.” — Hugh Armitage, Digital Spy
· “It’s still blowing my mind… Mesmerizing.” — Verushka Byrow, Pop.Edit.Lit
· “I watched this with my girlfriend, also a comic book fan, and we were high-fiving throughout!” — Clay N. Ferno, Forces of Geek

Check out other Sequart / Respect films:

· Neil Gaiman: Dream Dangerously is available on Vimeo and Starz.
· The Image Revolution is available on Amazon Prime Video (and on DVD).
· Grant Morrison: Talking with Gods and Warren Ellis: Captured Ghosts are available on Sequart’s own online store.
· Chris Claremont’s X-Men will be released by XLRator in the fall.
Email ThisBlogThis!Share to TwitterShare to FacebookShare to Pinterest
Newer Post Older Post Home