The Turtles journey to find a reclusive and indestructible empath- only to find that the assassin Hakk-R has found him first... and convinced him that the Turtles are the enemy!

Aboard a B-29 bomber soaring high over Europe, the Vice-President of a radioactive America one reality removed from our own is about to nuke all of history as we know it. This is the end. 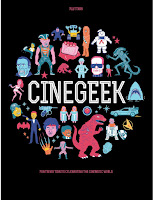 An encyclopedia of fun little tidbits about the most popular films! Imagine a list of the best romantic comedies without Hugh Grant! Or a tally of the most improbable fantasy flicks. Or even a ranking of giant movie monsters by size! In Cinegeek, messy, fun, and 100% subjective appreciation of cinema comes into focus for the delight of moviegoers and pop culture fans everywhere!

Just when things seem back to normal for the Joes - well, as normal as things can get for our heroes - nefarious forces once again plot their doom! Who will step up this time to face off against the latest threat to justice, freedom, and liberty?

If you're new to the Hasbro Universe or a long-time fan, this book is for you! Featuring a veritable TON of bios on your favorite characters, from E to O, plus papercraft projects, a map of Metrotitan, the current base of Optimus Prime, and an exclusive story featuring Kup and Bryce Chan's adventures in London!

oin Spyro and his fellow Skylanders as they embark on all-new adventures! Stealth Elf, Eruptor, Jet-Vac and all your favorites are here; ready to battle Kaos and all the various vile villains of the land!

On a world locked deep into an ice age, Kirk and the crew investigate the disappearance of a team of Federation scientists, and discover a long-lost civilization whose only survivor is intent on saving them... even if it kills them!

Nurse Chapel questions whether or not to continue her medical training until a shuttle incident prompts her to make decisions that will forever change her future. In the second story, Captain Kirk is forced to work with the Romulans after a biological weapon is unleashed, with unexpected - and surprising - results.

"Trial of Krang", Part 1 of 3. Infamous warlord Krang is set to go to trial in Dimension X. The Turtles are on hand to make sure everything goes smoothly. Of course it goes anything but! New villains, new worlds, and new intrigue await in the biggest interstellar adventure the TMNT have ever been on!

Before the FBI, before the X-Files, they were just two teenagers in search of the truth. On Martha's Vineyard, a strange encounter with a deaf girl sends 13-year-old Fox Mulder on the hunt for a mysterious signal. While in San Diego, young Dana Scully looks into a plane crash somehow tied to the man she helped put in jail. Two kids, two mysteries, one conspiracy that threatens the future of humanity.