Final chapter! Trapped by Cornwall, Juliet faces a never-ending nightmare of torture and humiliation. The young lover has a plan to win her freedom with blood, but she’s going to need fortune on her side if it is to succeed, because as the Bard himself wrote: so wise so young they say never do live long… 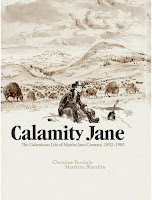 Return to the real-life days of the wild, wild West where the living wasn’t so easy... especially for women. Martha Jane Cannary was a bona fide frontierswoman, a professional scout, a drunk, and sometime whore, doing whatever it took to stay alive in the hardscrabble days of American expansion. Writer Christian Perrissin (El Niño, Cape Horn) joins forces with Alph-Art-winning artist Matthieu Blanchin to tackle the legend of this formidable prairie girl and her daring life alongside the likes of Buffalo Bill Cody and Wild Bill Hickok. Presented in English for the first time ever, this is the true story of an extraordinary, independent woman with gumption, the incredible Calamity Jane!

The FIRST EVER Jem/Misfits Crossover Event continues here in “INFINITE PART FOUR!" Outside the walls, free of JEMCORP synergy technology, a resistance is building, one led by none other than bandmates and girlfriends Kimber and Stormer!

Judge Dredd continues his mission to restore order to a lawless land! When Dredd seeks treatment for his strange and deadly ailment, his Mega-Train is attacked by the robot-hating Neon Knights! Behold the mystery and grandeur of The Blessed Earth!

Can the legendary Somnambula find a way to remove a curse on a giant snake before it eats an entire village? To do so, Somnambula will have to travel to the last place she will want to look— the belly of the beast!

The final Prequel issue hits featuring the most mysterious new enemy the Ponies have faced yet! The exciting caper that leads to the upcoming movie comes to a surprising conclusion!

Introducing an exciting new era in all-ages Star Wars comics! Each issue in this monthly series will feature two stories, starring your favorite Star Wars characters from all the films! This debut issue will reveal Rey’s early adventures on Jakku as well as a comical tale of clone catastrophe!