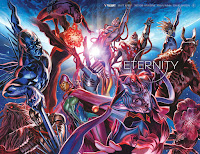 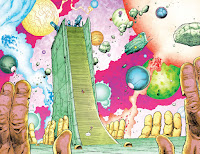 Today: Ray Garrison and his true love, Magic, thought they had left their days of tumult and violence behind them as they raise their newborn daughter, Jessie, in the quiet isolation of the countryside… Until Magic’s father – the depraved cultist simply named “Daddy” – seeks to bring his wayward progeny back into his flock by any means necessary. Now, torn between the family that loves him and the rage within, the walking weapon of war once called Bloodshot is about to give in to revenge…

Meanwhile: In the near future, can Magic and the now-adolescent Jessie outmaneuver the nanite-infused killer called Rampage long enough to answer the question that has haunted them for years… Whatever happened to the man they both loved? Whatever happened to Bloodshot? 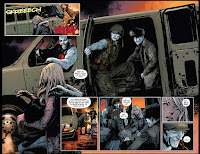 War has returned to the world of Gorin – but, this time, the planet’s ravaged armies face a threat from the stars, not within! Now, as the intergalactic assault reaches a critical peak, it falls to Gorin’s newly coronated emperor, Aric of Urth, to fortify not just a kingdom, but an entire world! With his sentient armor to aid him, the earthborn warrior once known as X-O Manowar will confront the conquering force known as the Mono Men on the field of battle…but if he doesn’t act fast, his reign will end just as quickly as it began!