NEW ONGOING SERIES! When Veronica is bitten by a centuries-old vampire, her thirst for blood threatens to turn Riverdale into a haven for the undead. Will she put an end to the vampire threat or give in to her blood lust?

Cosmo’s moon mission gets messy when a nefarious new foe appears! Can the Martian crew turn the tables on the vicious Venus princess, Cleo, or will they succumb to her will? 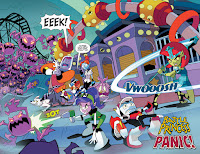 From Roberto Aguirre-Sacasa and the writers of the new CW series Riverdale, this ALL-NEW, ongoing comic series features stories set in between episodes of the new CW TV series Riverdale. Reggie’s harboring a deep, heartbreaking secret that only Archie knows about – but is there more to Reggie’s story than he’s saying? And will the whole world know the truth about Reggie Mantle just as prom night arrives?

BRAND NEW LEAD STORY: “Disaster Movie!”  Archie gets the chance to star in Hollywood blockbuster flick—at least he thinks he’s the star! The rest of the cast and crew may not agree!