The Fellowship has obtained sneak peeks of comics from the publisher that will come out this week..

“Kingdom of the Rats,” Part 1. New York City is in ruins after the Triceraton Invasion. Various groups jockey for control in the power vacuum. But there is one who doesn’t care about power, only chaos… the Rat King! Will the TMNT be able to stop him from doing the unspeakable?

Doc and the Brown family venture ever deeper into the 1939 World’s Fair as a case of mistaken identity puts Jules and Verne in the crosshairs of German spies!

Scrooge finally finds someone he trusts to run his business while he’s out adventuring: Manny, the Headless Man-Horse! Plus, Mrs. Beakley is called back into spy duty by British Intelligence, but when she isn’t available, she’s replaced by Webby and Lena Le Strange! 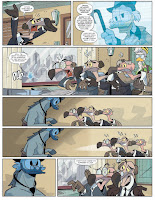 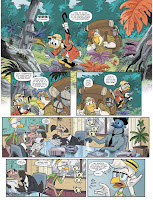 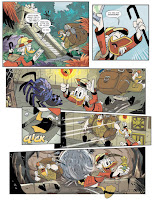 One of the most iconic villains of the Gears of War universe takes the spotlight! Years before he became the bane of humanity on Emergence Day, RAAM rose through the ranks to take leadership of the Locust Horde armies thanks to his intelligence, strength, and ruthlessness. Now, witness that swift and brutal ascent in... The Rise of RAAM!

Mitra’s new creepy phone is causing a rift between her and her friends—they just don’t believe it’s behind all the recent… disturbances. Is it too late to do a hard reset on her life?!

The town of Gristlewood is under attack from the most powerful being it has ever seen. Vivian and Geoff take the lead in fighting the evil, but can they even begin to match its power? Or will this be the end of the October Faction?

Asymmetric Warfare! Newly emerged from Microspace, Rom and the Micronauts seek out Baron Karza and his Dire Wraith allies. But it may be too late to save Earth from being consumed by a dark god from beyond our dimension!

Sonic’s new adventure continues, and when he comes across another town in need of saving, his old pal Amy arrives just in time to join the fight! The banter is fun, and the stakes are high, but things get really serious when Amy presents Sonic with a big request: rejoin the Resistance!

The enemy of my enemy… is not my friend. But Kirk and Kor find themselves forced to work together against a common foe. Alliance, or a chance for deadly betrayal?

The Flex Fighters are on the run with a giant Mantis monster in tow! Will they be able to save the Mantoid before it's too late?

The Sacred Sword has been drawn! Avalon and her new companions must work against overwhelming odds to prevent all-out war ! New villains are introduced, allegiances questioned, and battle joined as Gabriel Rodriguez continues his epic science-fantasy series!