His allies have turned against him. His last options have been exhausted. And there is nowhere left to run. Now, Ninjak – the rogue super-spy turned against his former masters by the cunning assassin called Roku – must face the final revelation of his no-holds-barred showdown with the heroes of the Valiant Universe. Bloodied but unbowed, Colin King’s gauntlet ends here…and Valiant’s first-of-its-kind crossover between live action and the comic book page is about to come to an explosive finale that will leave you stunned!

After three decades and 10,000 miles, the moment of truth has finally arrived: Our heroes are about to come face-to-face with Woody’s long-lost father! In Australia! Will Woody abandon his adoptive brother and trusted partner-in-crime-fighting to embrace a hard-partying scoundrel with no sense of decency? Or…is the world’s worst superhero team about to become a terrible trio?

Plus: Back in America, DC’s super-science crime cabal is about to get an energizing new addition!

It’s going to be a real “Martha” moment when Daniel Kibblesmith (The Late Show with Stephen Colbert) and dazzling artist extraordinaire Kano (Immortal Iron Fist) tear one family apart, only to bring another one together as “KISS KISS, KLANG KLANG” heads to a death-defying finish! 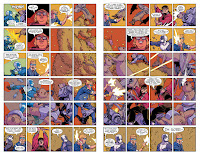