Jon and Liz are breaking up? Say it ain’t so...and if you thought giant sharks were the scariest things terrorizing the beach, just wait until the Lasagna Monster hits the shores!

Tournament day! Up against their rival the Kettle Balls, the Jazz Pandas are struggling to stay alive in the competition. Sometimes, though, the worst curveballs aren’t the ones literally flying at your face.

After an unexpected defeat, tensions run high among the fencers of Kings Row.

Lucy learns that she may not be alone in her dream landscapes.

As Lord Drakkon’s power and influence grows, the Power Rangers work with new allies from across time and dimensions, including Ranger teams such as Time Force, RPM, and Samurai, to craft a plan to fight back…but is it already too late? 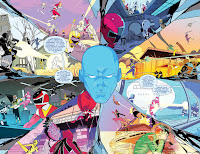 Steven and Amethyst sneak out to go to a concert with Jenny and Kiki, but they soon encounter trouble on the way there...