The horrifying finale! Bloody terror has overtaken Barrow, Alaska, as hungry vampires seek out human prey in the endless dark. Can newly appointed (and newly widowed) Sheriff Stella Olemaun save the last desperate vestiges of humanity in the town before it’s too late?

Back to the Future: Tales from the Time Train #6
Bob Gale & John Barber (w)
Megan Levens (a)

With Jules and Verne held hostage by German spies, Doc and Clara must pull out all the stops to rescue their sons! Guest-starring Einstein! (Not that one, the other one!)

Donald and Scrooge go on a fishing trip, but when they stumble on the campsite of Ma Beagle and her boys, they realize they may have chosen the wrong lake! Plus, when Dewey starts sleepwalking, the kids try to wake him up—but it’s not as easy as it sounds! 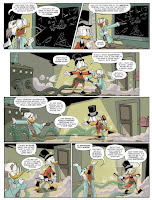 Rapunzel and Eugene try to modify the Royal Carriage, but what they end up with isn’t quite what they had in mind! Plus, the citizens of Corona start to walk around barefoot, like the princess they adore! That’s nice news for everyone... except the town cobbler!

LIGHTS OUT! The “Everlasting Voices” trilogy concludes with an explosion of hope, a grave betrayal… and more answers than you can handle! Events of the last six years build to a frenzy of revelations, casting everything that’s gone before in a new—and deadly—light. No exaggeration, no hyperbole: there has never been a more important issue of Lost Light.