Two iconic comic book characters meet up for the FIRST TIME in this historic crossover mini-series! A battle in Gotham City extends its reach into Riverdale—with Mr. Lodge becoming enemy #1 of the dynamic duo! Now it’s up to Veronica to recruit some help and place a call… to the Batcave! 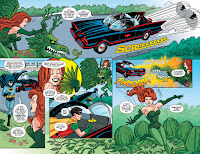 NEW STORY ARC! “Hunted,” Pt 3: As more women go missing in Riverdale, the Vixens worry that they may have been used as a pawn in someone’s evil scheme. They need to come up with a plan to save the missing ladies—but is it too late?

While Jughead confronts Reggie and his pack, the Coopers are done fooling around and send in the big guns for Jug. Will he—and his sister Jellybean—survive the chaos? Plus, a member of the Riverdale gang makes a startling decision that will change EVERYTHING!

Brand New Lead Story: “The Empress’s New Clothes!” Queen Veronica has it all… yet she still wants more! Tired of Veronica’s spoiled ways, handmaiden Betty promises the Queen a new dress that’s invisible to all those beneath her. Will Queen Veronica’s new wardrobe suit her needs or will she be in for a surprise?