Maggie isn’t your typical comic book, cartoon, and action movie fangirl. Through keen observation and unbending determination, she has taught herself all the death-defying stunts and fighting styles of her favorite action stars and superheroes! Unfortunately, Maggie has kept her eccentric hobby to herself, ever since it earned her the label of “nerd” among her classmates. After all, superheroes and evil villains are all kid stuff... right?  WRONG! The day before she begins high school, Maggie has a run-in with an evil mastermind and his sinister mercenary group. After years of training, it’s up to Maggie to be the self-taught superhero the city needs! But with bad guys crawling out of the woodwork and the daunting unknown of a high school ahead of her, can she really take on the world alone?

Your favorite smooth talking, sure-fisted, mustachioed adventurer is back for a dimension-bending adventure that turns up the heat like never before. ALBERT EINSTEIN has his sights set on ancient Egypt (where it’s really toasty), and he’ll need the Queen of the Nile herself, CLEOPATRA, to help him trap a thief that’s wreaking havoc on our timeline.  But as Einstein discovers, this bandit is just a pawn in a dark scheme that will unravel history!

Pursued by dark creatures who crave the precious pixie dust, Ionantha Hesperis and her fugitive guide Betula struggle deeper into enemy territory in search of clues to solve the hijacking of the Queen’s trade caravan and the theft of a massive repository of earth-power.  The mortal Ionantha must rely on her wits and knowledge, rather than magic she does not possess, to prevent the Queen’s treasure from falling into the wrong hands.

What do you do when an intergalactic league of blade wielders try to get rid of you? Start your own team! 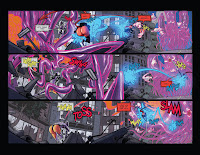