The critical and fan favorite series returns! Suspended by Internal Affairs, Detective Locke grapples with the demons of his past alongside his trusty partner, his childhood imaginary panther Spencer. But when Spencer and Locke face a scarred soldier named Roach Riley, will this unlikely pair finally meet their match? 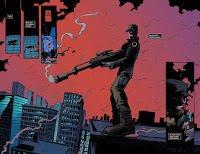 The dark past of the Gaijin Salamander is facing him one last time. A group of Crab bandits is hiding in the foggy mountains, attacking the villages nearby. Some frog villagers ask desperately for the mighty gaijin sword-master to help them. In the meantime, the civil war between the last samurais, headed by Swollen-Cheeks, and the emperor army, begins.

Featured on Halloween Comic Fest and spinning out of the events of the last Danger Doll Squad series, it’s the solo debut of the all-new fan-favorite mash-up character (featuring the powers of Zombie Tramp, Vampblade, and DollFace combined) in her own cosmic origin story!!

Delving ever more deeply into the mystery of the missing pixie dust shipment, Ionantha Hesperis, the only mortal faerie and the Queen’s inquisitor, must at last confront the first adult human to sense the faerie world and command its magic since Merlyn — over a thousand years ago.  In doing so, she walks alone, and plays a desperate game of cat and mouse with the most dangerous threat the Fey world has ever seen.

The chase is on! Not wasting a second after their leader’s capture, a truck full of armed minions charges through the city streets. With incredible speed and agility, Maggie is in hot pursuit with her new friend Griffin in tow. Their first joint adventure is off to a rough start, however, when Maggie realizes the possible consequences of dragging her untrained partner into the fray. As detectives Issac and Lee investigate the motives of this mercenary group, known only as “The Numbers”, their search brings them alarmingly close to Maggie’s personal life. With Maggie’s school, home, and hero life at odds, are friends a luxury she can afford? Or are they the only thing that can save her?

Vamplets have always been obsessed with their pets, but now who can save the Pony’s from a new villain?! Someone is capturing the different Pony’s all over Gloomvania, causing chaos in their wake. Who will be able to stop them, and what secret connection do they have to the elusive Ghost Pony?