"We are the last warriors, the last pacifists of that school, and I leave her inheritance in your hands ... you are a Gaijin." A feudal Japan with anthropomorphic and samurai animals inspired by Homer's poem on "War of Mice and Frogs", Batrachomyomachia. As in the classic poem, one tells of the futility of war and the desire for peace by GAIJIN, a foreign salamander in a Japan of frogs invaded by lizards. 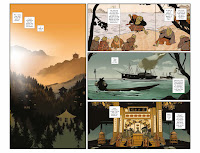 Her guide grievously wounded, Ionantha must escape the clutches of the Earth-faeries, solve the riddle of how a human can sense the faerie world (and even use the forbidden pixie dust), navigate the intrigue of court politics, and infiltrate a human village in her race against time to recover the lost shipment and save the faerie world from destruction.

Maggie can leap across tall buildings, take on a small army single-handed, and even dodge bullets. But talking to new peoples or making new friends? No way! None of Maggie’s training will prepare her for her greatest adversary yet: freshman year of high school! To make matters worse, there’s a boy at school who knows about her secret hero work. Is he an ally? Or will he spill Maggie’s secret and sabotage the next four years of high school? While Maggie is distracted by school, what will her recently defeated nemesis be plotting from prison?

The origin of the new Zombie Tramp unfolds with chaos as Angel awakens in her new form… rabid and angry as hell!