This is it! This is Matt Kindt’s final issue of his Eisner Award-nominated, critically acclaimed run on X-O MANOWAR.

X-O Manowar takes the final battle against the galaxy's baddest bounty hunters into space to decide the ultimate fate of the universe. 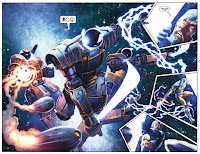 The cosmic and supernatural sides of the Valiant Universe collide on Earth! Oh my!

Having crossed over into the Deadside, the Eternal Warrior comes face to face with Syntilla, the young girl who poisoned Tama on behalf of her master. Will the Eternal Warrior save his young charge or will the world suffer another catastrophic loss? Meanwhile, Doctor Mirage and Hwen do their best to keep Tama alive. Will the doctors find the right medicine or will the young Geomancer perish before help arrives?