Seafoam follows the adventures of Madison, a spunky 9-year-old girl who is granted passage to a beach full of mystical and nautical themed creatures after helping a beached narwhal. There she befriends a stand-offish boy she calls Blue, who has a few secrets of his own.  In their premier adventure the kids face off against the Hypnoctopus, a vulgar vulgaris with the ability to control minds. 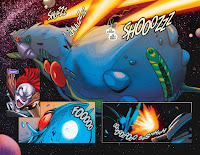 Angelica is and has been the most beautiful princess in all of Ashland…but what does she do with that? Ever since Adrienne’s visit she’s been determined to find a calling and to do something more than just sit around and look cute.

And she’s been failing, miserably. But when a new game becomes popular among her followers, Angelica discovers that there’s more to this game than meets the eye and that she might be really good at something after all!

Tatiana and her army of undead goons are coming for Angel Lynch. Can the new Zombie Tramp get a grasp on her burgeoning powers to fend them off?