Will we finally learn the truth behind Bloodshot’s origin?

This issue will change everything you know about the nanite-filled supersoldier. The action-packed ending of BLOODSHOT RISING SPIRIT!

Punk Mambo wants revenge. Best of luck to anyone standing in her way.

Prepare yourself for some mystic mayhem!

Learn the origins, secrets, alliances, and vendettas of all of your favorite characters. You'll find everything you need to know – from Bloodshot's first firefight, when Archer met Armstrong, the secrets of the Deadside with Doctor Mirage, all the way to the true origin of the X-O Manowar armor and everything in between – all right here! 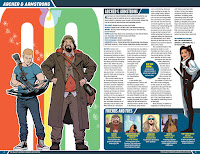