Clawing back from defeat, Spencer and Locke make their final stand against the merciless Roach Riley. Can these unlikely partners overcome their inner demons long enough to stop this reign of terror? Or will Roach have the last laugh after all? Find out in this thrilling conclusion!

CHAPTER 2: WHERE’S OUR HERO? When cancer-ridden former superhero Laird Mason launches a violent and misguided Death Wish-like campaign to purge the city of supervillains before he dies, his straight-laced protégé, Abel Raines, is tasked with bringing him in. The problem? Raines isn’t remotely up to the task. A story presented exclusively from the maniacally twisted point of view of a man who hasn’t slept in over seven days.

Seafoam follows the adventures of Madison, a spunky 9-year-old girl who is granted passage to a beach full of mystical and nautical themed creatures after helping a beached narwhal. There she befriends a stand-offish boy she calls Blue, who has a few secrets of his own.  During this adventure Madison becomes the lucky charm for a jinx as she risks her own safety to save him from the ornery island natives.

Nate Willner makes a lot of mistakes in his life, like hunting and cooking dinosaurs from another dimension. But one of the biggest blunders he’s ever made is taking his best friend, Starlee, for granted. This issue, she confronts him about that. Plus, Captain Jim makes a plan for taking down Owen. 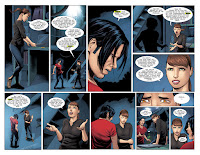 Angel wakes up to find herself being held captive, and this time not by Russians or human traffickers. This time she finds herself being sold to the highest bidder at a necrophilia club in Norway! Will she be able to escape?!