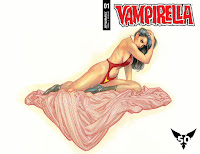 Elvira: Mistress Of The Dark #7

The Hellish hijinks continue, as Elvira and Faust go deeper and deeper into the Underworld. Will they escape judgment, or does the Lord of the Flies have something special waiting for them? It's Dante's Inferno with sex appeal and dirty jokes, in the next exciting issue of ELVIRA: MISTRESS OF THE DARK, brought to you by David Avallone (Bettie Page) and Dave Acosta (Twelve Devils Dancing), the team who brought you Doc Savage: Ring of Fire and Twilight Zone: The Shadow, which maybe you would have read if Elvira had been in them.

Turok discovers the greatest mystery of the Lost Valley is ... Turok himself?! Stunning revelations abound as Turok learns the long-buried truth about the Lost Valley, and about himself. Now he just has to live long enough to escape this time-lost land and the fate waiting for him thanks to the bounty hunter who has doggedly pursued him. Oh, and dinosaurs too! More prehistoric peril by Ron Marz and Roberto Castro!