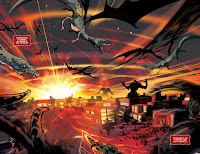 A standard fight between roommates gets complicated when it involves the undead. With all the ghosts in the Manor choosing sides, will Daphne ever be truly at home here?

Hana and Kenichi’s paths converge once again as the pack of bandits that have taken Kenichi hostage attack the Shogun’s traveling party!

NECESSARY EVIL CONTINUES! It's The Power Rangers vs Lord Zedd, as seen through the —literal—lens of Bulk & Skull. But can these two film the latest episode of Ranger Station and truly escape unscathed?