War has come to the small planet, and Mal finds himself caught between the two sides. Will Mal be able to stem the tide of war, or is he already too late to stop it? And how will the mysterious figure from his past influence his choice?

Gran’s monster hunting wasn’t the only thing she kept from Duncan. He’s about to discover more of the family secrets, and the sacrifices one must make to reach the Holy Grail.

Things in Archer’s Peak are only growing worse. Erica Slaughter is on the hunt, but the children are still dying. Angry and afraid, the inhabitants turn their suspicions on the stranger in their midst, the woman who arrived just as the killings began. Will Erica be able to save the town, or will the very people she is trying to protect turn on her? 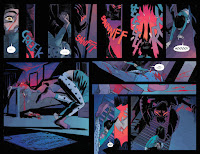 Join Lars and the Off-Colors as they begin the treacherous journey to Earth. As they travel, Lars tells the Gems about everything he misses about his home planet, becoming frustrated as the Gems can’t understand such human concepts. Will his crew ever be able to understand him, or is Lars stuck as an outsider forever on his own ship?